Jump to Latest
fullycharged
Foxconn's Lordstown, Ohio plant will build the Fisker Pear and the Monarch Tractor’s MK-V Series autonomous electric tractor. It's also the same plant where the Lordstown Endurance electric pickup will be built. 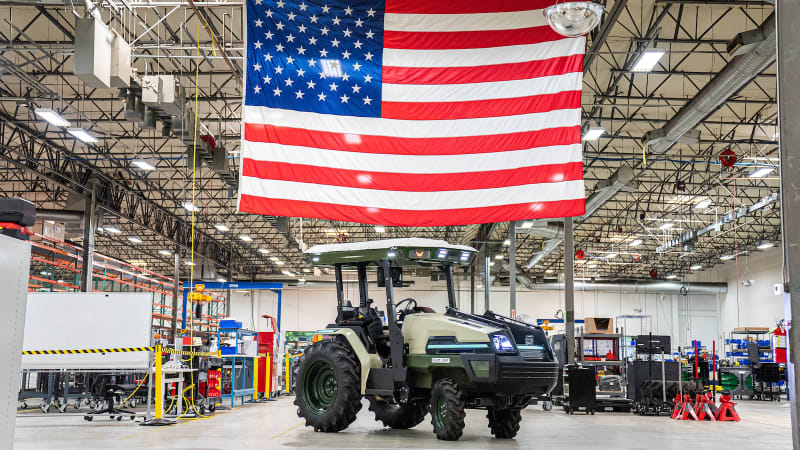 With a base price just shy of $60,000, the Monarch MK-V Series is powered by an electric motor with 70 peak horsepower. Its onboard battery pack offers "up to" 10 hours of operation.

www.autoblog.com
It's proven quite a challenge to build fully autonomous vehicles that are capable of navigating our nation's roadways. It's a wee bit easier to accomplish the driverless task off the beaten path. Foxconn, otherwise known as Hon Hai Technology Group, announced plans to build autonomous electric tractors at its plant in Lordstown, Ohio, a location where several future vehicles are already in the works, notably the Endurance pickup truck from Lordstown Motors and the Fisker Pear.
Foxconn is the world's largest electronics manufacturer. Monarch Tractor’s MK-V Series is said to be capable of operating either manned or unmanned. Before production begins in Ohio, initial versions of the tractor will be assembled at Monarch's Livermore, California, facility. "Creating the industry's most advanced tractor demands a manufacturing partner with the experience to quickly scale and execute with precision," Praveen Penmetsa, co-founder & CEO of Monarch Tractor, said in a statement.
With a base price just shy of $60,000, the Monarch MK-V Series is powered by an electric motor with 70 peak horsepower. Its onboard battery pack offers "up to" 10 hours of operation, though that's surely dependent on the type of work it's being used for. Hot-swappable battery packs are also possible, theoretically enabling 24-hour operation.
Theyr'e not electric, but autonomous offerings from traditional tractor brands such as Case and New Holland have long been in development, and John Deere showed its fully autonomous 8R model in January at CES, with plans to make the 410-horsepower tractor available later this year.
F
fullycharged

AT4X versions of the GMC Sierra and Canyon.
130+ members
Join now to ask and comment!
Continue with Facebook
Continue with Google
or sign up with email
Top